The Half Moon Bay Shakespeare Company

Now in Their 9th Season

To produce Classic Theatre each summer in the Community of Half Moon Bay, California that is accessible, entertaining, challenging, educational and enlightening for both audiences and players alike.

By aligning ourselves with local arts organizations, businesses, trusts, and other entities in the San Francisco Bay Area Peninsula and Coast, we strive to be responsive to opportunities and challenges, both artistic and economic, that will produce theatre with a deep commitment to education, outreach and audience involvement. We also seek to celebrate diversity and to enrich and enliven the existing cultural and artistic atmosphere of our community and world. 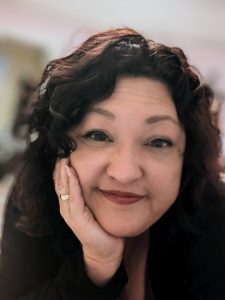 Since completing her undergraduate and graduate work at Baylor University and the American Conservatory Theater, Debbie has directed shows at the Exit, the Eureka, and the Magic Theatres for various SF Bay Area companies like Eastenders Repertory Company for which she also served as managing director. For a time, Debbie served as one of the Business Representatives for the Actor’s Equity Association in the Bay Area. Debbie has directed shows in Austin, Tx at FronteraFest and for ScriptWorks, a playwriting organization where she was board chair from 2012 to 2018. Debbie also served as the Membership Director for Austin’s B. Iden Payne Awards and helped shape the definitions of excellence in all award areas. While in Atlanta, Debbie performed and directed with NextStage Theater. Her most recent roles were Lenora in Conversation ‘Bout the Girls with Visions of Possibilities, Paulina in Woman on the Verge of a Nervous Breakdown at Townhall Theatre and you may have seen her as the Nurse in Half Moon Bay Shakespeare’s Romeo y Julieta in 2017. Debbie loves to travel,  enjoys coaching actors and teaching voice and speech but daylights in corporate America as a Healthcare IT and Operations consultant. 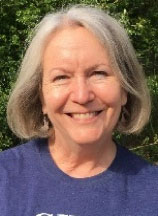 Heather (she/her/hers) of La Honda has been a theatre consultant for 35 years and leads the San Francisco Bay office of Schuler Shook, a theatre design firm. She earned her BA in drama from Stanford and MFA from NYU Tisch School of the Arts. A lighting design member of United Scenic Artists, Local USA 829, IATSE, she has designed for theatre, music, and dance in the US and abroad since 1986. She is President of the Board of Directors for the American Society of Theatre Consultants and serves on the advisory board of the Studio School of Design in New York. Her theatre planning projects include venues for the Oregon Shakespeare Festival, Utah Shakespeare Festival, La Jolla Playhouse, Portland Center Stage, A Noise Within, Seattle Children’s Theatre, and hundreds of commercial, civic, college, university, and secondary school performing arts facilities. Locally, she is a founding board member of the Stanford Coastside Club and a volunteer AYSO referee. She fell in love with Shakespeare (and theatre) in high school when she auditioned to play Olivia in Twelfth Night and was appointed stage manager instead. She and her late husband, Bruce Krempetz, led an after-school drama program in the La Honda-Pescadero schools for 15 years. They have four adult children and two grandchildren. 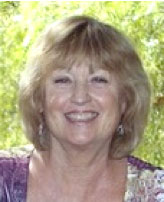 Lee is a founding member of Half Moon Bay Shakespeare Company. She began her love of the Bard while earning a B.A. degree in English at Westminster College and thereafter taught Shakespeare to her middle school and high school students. While raising a family, she occasionally returned to the classroom while also authoring and teaching community college seminars. She later earned a CPM and enjoyed a career in project management in a large public agency in the Bay Area. There she used organizational and communication skills toward the building of large public projects.  Lee has served as Associate Producer/Producer for all 8 seasons and manages the company’s business. Those productions include Hamlet, The Taming of the Shrew, A Midsummer Night’s Dream, The Tempest, Macbeth, Romeo Y Julieta, Twelfth Night and As you Like It. Lee resides in Half Moon Bay, CA and is involved in various community organizations including college scholarships for local women students. She loves spending time with her 2 kids and 6 grandkids who reside in Danville, CA and Boulder, CO. 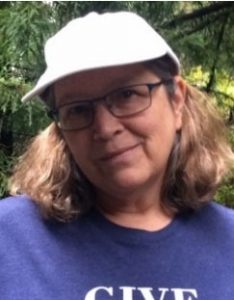 Jeanie (she/her/hers) of La Honda has been on the board of the Half Moon Bay Shakespeare Company since 2016 and has volunteered for the Company since its founding. A Shakespeare fan since her teens, she got involved with local theatre when her younger child began acting in La Honda/Pescadero school plays and Coastside community theatre productions at the age of 8. In addition to performing secretarial duties for the Company, Jeanie creates the playbills for productions and helps with set build and strike, props, Carter Park cleanup, ticket sales, and working security or concessions during productions, often donating and pouring her homemade wines. She also volunteers for Coastal Repertory Theatre, where she produced four plays: Rabbit Hole, Artichoke, The Underpants, and Lion in Winter. She received a B.A. in journalism with a minor in chemistry from San Jose State University, and in non-theatre life is a manager of technical publications in the Federal Business Development group at SRI International, where she applies her love of a good story to help researchers and scientists write compelling grant and contract proposals on a wide variety of technical topics. 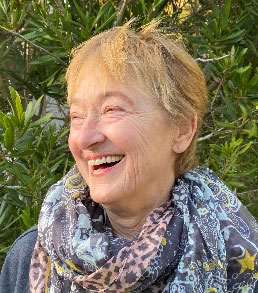 Suzanne’s love of theater began when she was a child in New Jersey, when her mother would take her to see musicals on Broadway. Her love of live theater grew to a whole new level when her daughter began to perform as a child. Her daughter’s love of Shakespeare has been inspirational to Suzanne, and it was she who turned Suzanne on to Shakespeare when she played Ariel in “The Tempest” at the age of 9. Suzanne has been a fan of Half Moon Bay Shakespeare Company since its beginning, when the exciting idea of having a local Shakespeare company came to fruition. Suzanne is a psychiatric social worker by profession and has worked extensively with children and youth throughout her career. She has witnessed the joy and positive development of kids who have the opportunity to be exposed to theater, whether onstage, offstage, or in the audience. Suzanne’s support and enthusiasm for Half Moon Bay Shakespeare Company emanates from her own experiences with theater and from witnessing its impact on others. Providing community-based productions that are accessible to all ages and socio-economic groups is an integral part of Half Moon Bay Shakespeare. It is to this effort that Suzanne brings great enthusiasm for theater and years of experience as a loyal volunteer. 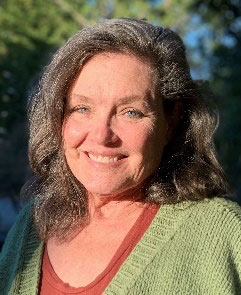 Lisa (she/her/hers) developed her love of Shakespeare attending Free Shakespeare in the Park in San Francisco, which happened to coincide with her birthday. She has had an abiding love for the Bard, outside and with a picnic, ever since. She has been known to host readings around the kitchen table while baking holiday cookies with her children (a family event known as Shake and Bake), and has driven her children all around the Bay Area for summer Shakespeare Camps. She became an active volunteer when her son started performing. In particular, she has put her sewing and cosplay skills to work assisting with costuming in a variety of Coastside productions. Lisa has a BA in Biology from UCSC and, prior to her retirement, spent over 30 years in the institutional investment business as a trader. In addition to volunteering for Half Moon Bay Shakespeare, she is a 17-year volunteer for the Greater Farallones Association, surveying beaches for the Farallones Marine Sanctuary.